Stephen Curry said, “Success is born out of faith, an undying passion, and a relentless drive”. The story of Bethany Hamilton embodies this quote. Many people think you are crazy when you break your arm and you go back out on the football field a couple minutes later with your arm in a cast. They think you’re bananas when you flip a race car on a track going 160 mph, and you decide to get back in the car after you heal. The world thought the same thing about Bethany when she got back on a surfboard after having her arm bit off by a shark. Bethany Hamilton was born on February 8, 1990 in Lihue, Hawaii. There is no shock when you learn that she start surfing at age 7. She was a natural out in the water. There was no place she would rather be than coming out of the other side of that barrel. Surfing wasn’t a hobby for Bethany. Even though she loves the sport, surfing was life; it was her passion. In 1998 she had her first surf competition where she came in at first place in the Rell Sun Menehune in Australia.

Laura Kasischke said, “life can change in an instant. That instant can last forever”. On October 31, 2003 Hamilton’s life was changed forever. Bethany was out catching waves at Tunnels Beach, Kauai with her best friend Alana Blanchard, her dad and brother, Holt and Byron. While surfing Bethany was attacked by a 14 foot Tiger shark. The shark tore off her left arm just below the shoulder. She was rushed to Wilcox Memorial Hospital where they saved her life. She had lost over 60% of her blood. She is a beautiful miracle! 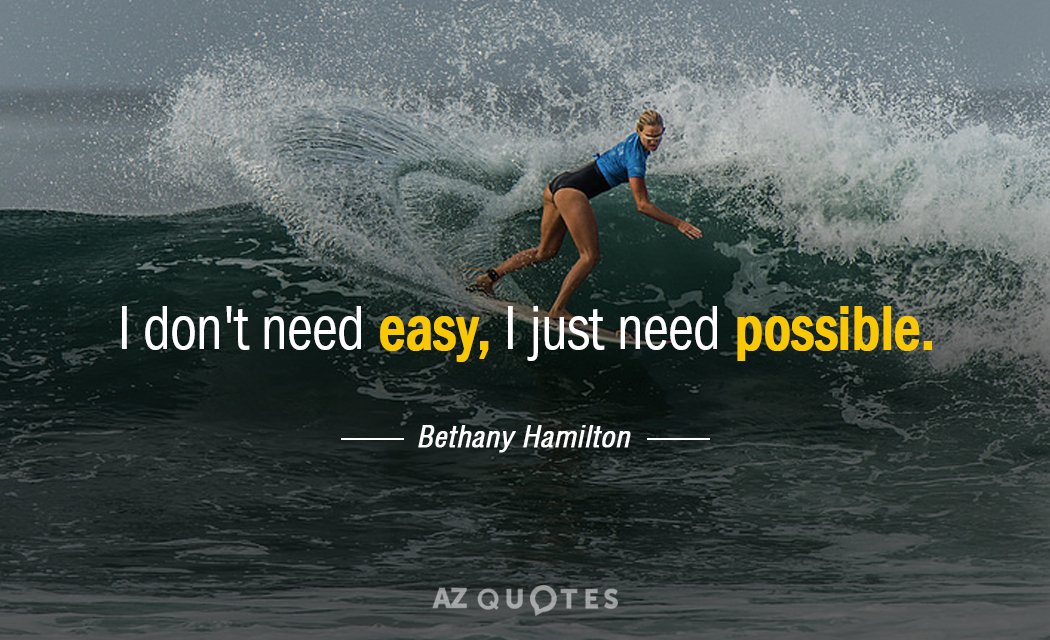 Despite having one arm and enduring that traumatic experience, Bethany was back on the water in less than 4 weeks. She was back on her board about a month after the attack. On January 10, 2004, she entered a major competition. She has set the surf world on fire with her comeback that many didn’t think was possible.

In 2004, she won the ESPY Award for Best Comeback Athlete while also receiving the Courage Teen Choice Award. Later in 2004 MTV Books published Hamilton’s book Soul Surfer. This book was later turned into a movie which is one of the most inspirational movies today.

One of her main driving forces was her faith in God. She said that turning to Jesus after the shark attack kept her alive. God gave her strength to keep going. At a time when it is so easy to blame someone for your situation, she chose to see it as an opportunity to help and inspire people. God has a lot more to give than the world has to give.

Bethany Hamilton showed the world that nothing was impossible. When they told her it was going to be hard to surf again, she replied “I don’t need easy, I just need possible”. She is a real life inspiration. She had proven that if you want it bad enough, you can do anything. She has taken her passion plus her situation and found a purpose. I’m going to end this with a quote from Bethany herself. She says:

“When you fall in the impact zone, get up, because you never know what’s over the next wave”